This is Part 2 of a 4 Part Article.
Part 1 covers assembling the hardware

Now that we have assembled the hardware parts necessary, it’s time to assemble the physical package.   Next we have to load the software to run the Pi.   I am not covering  in detail physical assembly of the Mini DHAP.   For the most part Hardened Power Systems (HPS) puts together the DHAP , and you only have  to mount the circuit boards, and batteries.   If you need assistance with your purchase Bill at HPS (931) 207-0079 has always been helpful, knowledgeable, and given good support.

When you are mounting the circuit boards HPS provides Stainless Hex Head Screws to mount them.  Bill prefers them since it is much harder to strip the heads out.   To assemble the DHAP you will need a 1/16th in Hex Key.  Use proper techniques when handling the Raspberry Pi and DVMega Boards, so as not to impart a static charge and ruin the solid state components.  Also watch tightening the screws that hold the boards in place, its only ABS Plastic, so as not to strip out the built in standoffs.

Lastly, pay close attention to mounting the DVMega onto the stake pins of the Raspberry Pi.     The pins are easily bent, and straightening them out can result in breaking them off.  Also watch alignment of the female header of the DVMega Board.  It should attach to both rows starting at pin 1.   I have seen a few people shift it down one pin placing the header starting on pins 3 & 4 instead of pins 1 & 2.  It’s best to review the installation PDF published here before continuing.  Note: If using the DHAP & RasPi2 or RasPi3 you will not need to glue a stand off to the board, HPS provides a  mounting bracket.

The Raspberry Pi has anywhere from 256 MegaBytes to 1 Gigabyte of on board memory, but uses the SD card as its solid state disk drive.  The older Raspberry Pi model 1, uses the Full size SD card while the Raspberry Pi Model 2 and later use µSD cards.   The form factors are different, and the Mini DHAP requires the Model 2 or 3.  You still can use a DV Mega card with the Model 1, just not the DHAP case, so this article will also cover setting up that configuration, but Power, Packaging, and Cooling (PP&C) are left as an exercise to the student.

This variant may only require two 18650’s as the Pi 2 board draws about 500 mA, the Pi 3 Draws about 700 mA, and the Pi Zero with WiFi draws about 120 mA at 5V.  I would also suggest you add a Buck Converter to the power circuit if you intend to build one so you will need to provide 6.2 VDC to power the 5V Raspberry Pi’s.  Note the Buck converters will generally handle 6-36VDC and give you a reliable, steady 5VDC output up to about 3A.  Also you will need to put stake pins on the Pi Zero for GPIO bus, to mount the DVMega.

I will reiterate this further in the article, but most SD & µSD cards can be read an infinite number of times.  However, any one memory location can only be written about 100,000 times before data loss will occur.  Since the Pi’s use this type of memory as its disk drive you can count on them failing and the Raspberry Pi to act like it has suffered a disk failure.  It’s really no big deal, since all you have to do is rewrite the same software onto the same card and you are back in business again.   You can go through all the steps in this article, or simply read the completed file back into your computer as an .IMG file and not have to generate the software again.   The .IMG file will generally be the size of the SD Card, so rather than take up the space on your disk, you may want to copy the .IMG file to a USB Thumbdrive for backup purposes.

I always said my friend Murphy was an optimist, so if the card is going to fail, it will do so in the field when you don’t have a laptop with you!  To cover that eventuality I carry a second duplicate µSD card in it’s SD Carrier in keep it inside the DHAP case for an “in the field” backup.  Also the Raspberry Pi 2’s have a spring powered eject for the µSD Cards.  I have seen cases where they get bumped while the PI is powered up, and this can cause the data on the card to be ruined and need to be re-written again.

So with that caveat mentioned let’s generate an operating Raspberry Pi System.

For a multimode radio hotspot we will generate a Thin Client (Lite) version of MMDVMHost.  A thin client uses a web server to control the hotspot, and only needs a web browser as the user or client terminal to access the hotspot.  Thus, I can use my laptop, tablet, or phone for a screen, in fact,  anything with a web browser.

Note: If you do not have your DHAP Assembled yet, or you are not planning on using one, you can still proceed with generating the system with a µSD Flash card, and a bare Raspberry Pi Board with or without the DVMega Board.  If you don’t have a case for the Pi just be careful as not to cause any shorts until you can protect the bare board.

The Computer is used to download the software onto the µSD card, and then prep the RasPi for use using SSH, so not much software is required on the prep machine.  The Find My Pi Software referenced here will provide an SSH terminal for MacOS, Windows, and Linux users.  However the initial setup process will vary depending what operating system you use.    If you are using Windows or Linux, this article will assist you for the most part, but some specifics will be different.  For those operating systems, there are plenty of articles on the Web to more than cover the slight differences if you get stuck.  Just ask your favorite search engine for help.

Note: you will need a desktop or Laptop for this step, most tablet computers cannot do the µSD Card Prep.  Once Pi-Star is running you can use a tablet or phone to configure it.

Set up your Raspberry Pi

You may need a couple of cables temporarily for the next steps. An Ethernet cable, and a USB to µUSB to power the Pi (5VDC), or service power (117VAC) to 6-36 VDC with a 5mm x 2.1 mm Coaxial power connector.

A note about the Find My Pi Software.  There is nothing magic about this software, it just makes the job of setting up the Pi so much easier.  Prior to this software there was a long chain of software loads, that this does automatically.   Additionally it will put a couple of additional programs on your Pi.   It loads some development software, which may be useful in the future if you want to add some additional functions such as a display, or searching logs, etc.  It loads a piece of software originally developed by Apple, called Bonjour, that allows you to access your Pi by <computer name>.local as opposed to having to find it by IP address.   It loads a some software originally developed by Microsoft, called SAMBA, that allows you to access the Pi’s Disk drive from another computer on the network as a network mounted drive.

Lastly it loads a piece of software developed by AdaFruit Company called Occidentalis.   The name Occidentalis is a variety of a black raspberry.   The software uses a file on the boot partition (occidentalis.txt) that contains the host name, the WiFi SSID, and the WiFi Password, and sets them up when the Raspberry Pi is booted.  A disk that the Raspberry Pi uses is partitioned into two formats.   A linux format, and the boot partition which is written in the FAT format.  A FAT formatted drive is readable by almost any computer (Most Thumb drives use this format.)  While putting SSID and it’s password in an unsecured text file on the disk is a major breach of security it is convenient for headless versions of the Pi, as it allows easy switching of the WiFi (at Home, In your Mobile, Your cell phone or other mobile hotspot, or the local coffee shop) depending on operating location.   If you want to remove this security flaw, a simple one line command will remove it.   It’s documented below, and it’s use is optional as to the user’s preference. 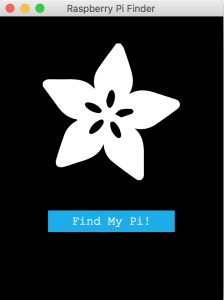 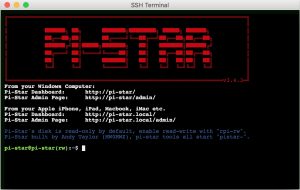 Filesystem at /dev/mmcblk0p2 is mounted on /; on-line resizing required

Prep the Pi to Flash the DVMega Firmware (Optional)

Update the DVMega Firmware (Optional if Greater than 3.07)   You can find an article to set your Pi up to flash the DVMega Firmware by adding a wire to the board.  Note: this will void your DVMega Warranty so solder carefully!   It’s documented here:

HOW-TO Update DVMega firmware without a programmer or an Arduino

After you have made the hardware changes the following steps will setup the pi to update the firmware, and then actually do it.

Flash the DVMega Firmware (If older then 3.07)

Your Raspberry Pi system is now generated.  Now would be a good time to power off the Pi, remove the SD Card and copy the system as an .IMG File using what ever Software you used to create the SD card in the first place.  If you capture the image of the card, it will be the size of the card.  This will be a lot of wasted space, since the actual disk used is between 2 and 4 GB.  I recommend use a thumb drive to hold the image rather than your disk drive.  Now is also a good time to copy that image on the second SD card you may have purchased as a backup incase the operating card gets clobbered/over written too many times.

The next section will cover the setup of the MMDVMHost for radio operation.  We are almost there, and the next steps are easy.

Links Below to help you find software: